I'm back from a wonderful anniversary weekend at the beach. On the return trip, we also made a slight detour near Easton, Maryland, to see this historical marker placed at Frederick Douglass's putative birthplace, on the banks of the Tuckahoe River.

I say putative only because, as with most historical markers, it's difficult to imagine how this particular spot could be fixed upon as the spot. Historical monuments and landmarks always play a delicate balancing act: on the one hand, their attraction to tourists, passers-by, and history nerds like myself stems from their claims to authenticity and immediacy ("you were there ..."), but on the other hand, those claims are always undermined by the experience of standing in those spots. You go to see the "real" John Brown's Fort, for instance, and discover that the building has been moved four times, reconstructed several times, and now rests 150 feet from its original spot, which has been buried by a railroad embankment. You go to see the "real" Dunker Church at Antietam and learn that it was completely destroyed by a storm, and that the current reconstructed building contains "some materials" (one brick? two? a beam?) from the original building.

Here's the plaque. You may be able to make out the sign for the "Tuckahoe River" in the bridge in the background. The bridge also has a sign dedicating it to Douglass. 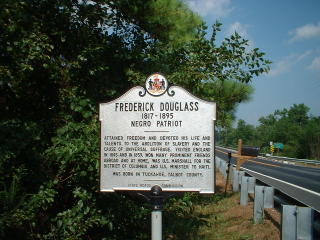 And here's another view: 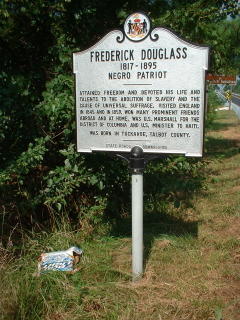 If you click on the picture to enlarge it, you'll see that there's an empty beer case in the lower left corner. Sigh.