If you have not seen the David Rumsey Historical Map Collection before, that's a problem you need to fix. I have just recently become aware of it myself, and I have been finding it very useful.

The collection contains high-resolution images of maps from the eighteenth and nineteenth centuries; they are beautifully rendered, yet surprisingly easy to download and view. After searching for maps by country, province, or keyword, you can zoom in and out on particular areas, see detailed information about the original publication of the map, and save selections to your computer. (The maps are all provided under a Creative Commons license. You can read more about Rumsey and the collection in the July 2003 issue of Common-Place.)

Be warned that this is where the post begins to get nerdy. [Ed.--Wasn't it already nerdy? Yes, but I am about to kick things up to another notch of nerdiness.] Having ready access to 19c maps has recently helped me to visually track the European travels of one of the characters in my dissertation, Henry Clarke Wright. (The proto-blogger?) In the 1840s Wright spent several years in Europe, lecturing on abolitionism, "non-resistance," and free trade. Most of his time was spent in the British Isles, but in 1844 he spent about seven months on the continent.

Wright's visit was supposed to be recuperative. After coming down with a cough on the lecture circuit in Ireland, his friends there convinced him to travel to Graefenberg in Austrian Silesia, where an obscure farmer named Vincent Priessnitz had established a hydropathic "water cure" spa. A typical day of the "cure" involved a quick succession of hot and cold immersion baths, after which patients often wrapped themselves in towels that had been buried in the snow overnight. After six months of that, Wright headed back to London via Austria, Prussia, Switzerland, and Belgium.

Along the way, in addition to touring Waterloo with a veteran of the battle and haranguing locals of various nationalities for their submission to Old World tyranny, Wright bumped into two of Metternich's children with their tutor on a Danube steamboat and heard a performance by Johann Strauss. All of this was reported--at great length--in Wright's dispatches to the Boston Liberator, William Lloyd Garrison's antislavery newspaper. (You can read more about the very eccentric Wright in Lewis Perry's 1980 biography.)

The Rumsey collection made it very easy for me to trace Wright's route both to and from Graefenberg. Although I have not yet been able to locate Graefenberg itself on a map, several of the maps in the Rumsey collection included many small stops mentioned in Wright's journals and letters, along with markings for contemporary roads. I do know that Graefenberg was about 70 miles south of Breslau. Wikipedia says it is present-day Jeseník.

Below is a full color clipping I took from an 1842 map by John Arrowsmith, followed by a black and white copy with my marking of Wright's circuit, which took him through Berlin, Olmutz, Vienna, Salzburg, Innsbruck, Zurich, Geneva, Cologne, Aix la Chapelle, Brussels, and Ostend. 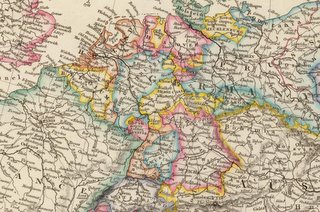 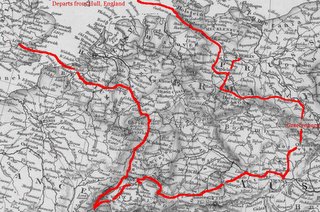 Click on the maps to enlarge them. And remember that there are many more where these came from here.